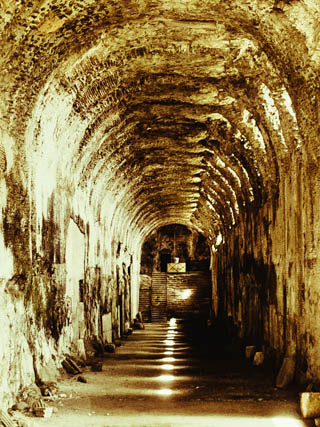 Summer 2013: A Tour to Imperial Residences and Villas in Rome and Latium

In June 2013 the Advanced Program of Ancient History and Art organized its first joint Faculty-Student Research Tour, aiming to give PhD students the opportunity to get more closely involved in the research and planning initiatives of the Program itself. The tour was led by APAHA Directors Professor Francesco de Angelis and Professor Marco Maiuro; the participating students were Emily Cook (AHAR), Evan Jewell (CLST), Joe Sheppard (CLST), and Caroline Wazer (HIST). The group visited several sites in Rome and Latium to examine, compare, and discuss residences and villas of Roman emperors, thereby adding a further dimension to the scholarly scope of the Program and to its original focus on the villas of the Vesuvian area. The richness of the experience was further enhanced by the fact that a substantial part of Professor Maiuro’s recently published book, Res Caesaris, is devoted to the discussion of the economic role of emperors’ villas and estates in Italy.

The itinerary included both famous places, such as the imperial complex on the Palatine and Hadrian’s villa at Tivoli, and less obvious but no less relevant sites, including several that are usually inaccessible to the general public: e.g., the impressive structures of Domitian’s villa at Castel Gandolfo, now incorporated in the summer residence of the popes; the remains of another villa of Domitian at Sabaudia, which are scattered inside the National Park of Cape Circeo; and Trajan’s villa at Arcinazzo, where, among other things, a room was recently discovered that exceptionally preserves its whole opus-sectile decoration of colored marble slabs.

Among the issues that participants systematically addressed during the tour were: the diachronic, long-term dimension of the life and usage of imperial villas, down into Late Antiquity and the early Middle Ages; the accessibility of imperial residences and villas; their relationship with the surrounding environment, be it urban or rural; the distribution and mutual spatial relationships of specific activities within the villas; room functions and movement patterns. On the methodological level, the overarching question was how to combine and integrate different sources of evidence—archaeological, literary, juridical, epigraphic—in a sound and productive way.

The Research Tour was cosponsored by the Classical Studies program and by the Department of Art History and Archaeology.

Photo: Castel Gandolfo, cryptoporticus of Domitian’s villa (the largest and longest known one from antiquity)