Excavations and Research at Hadrian’s Villa
Hosted by the Classical Studies Program at Columbia (CLST) since 2014, the Advanced Program of Ancient History and Art (APAHA) offers a new credit-granting interdisciplinary summer class at Hadrian’s Villa in Tivoli, near Rome. Hadrian’s Villa, a UNESCO World Heritage site, is one of the most important archaeological locations in classical antiquity. Since its rediscovery in the Renaissance, the villa has attracted scholars and inspired artists, architects, and writers. A site of almost 296 acres, Hadrian’s Villa offers a visionary synthesis of Roman, Greek, and Egyptian architectural and artistic traditions. 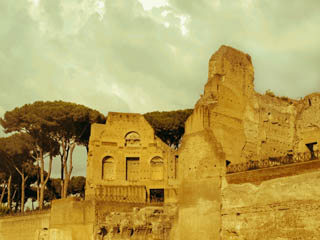 The summer class is part of a large scale research project which aims to understand Hadrian’s Villa on the basis of comparisons with the imperial buildings on the Palatine in Rome, other imperially owned villas in central Italy, and Roman villas in general. The project will contextualize Hadrian’s villa within this broader framework, and to document its reception in modern times. Both in teaching and research, we will take advantage of the site’s strong interdisciplinary potential, at the intersection of political, social, artistic, architectural, and cultural history.

The project will examine a wide range of evidence relevant to the dynamics of the Roman imperial court: material findings, as well as literary and epigraphical sources. In particular, it aims to investigate the day-to-day dimension of the villa, as well as the relationships between everyday, ceremonial, and official uses of the complex. Though much scholarly work has been done on the site’s sculptures and mosaics, more “humble” artifacts, relevant to manifold activities on the villa’s premises, still await in-depth study. Moreover, the post-Hadrianic phases of the villa will be systematically documented and analyzed for the first time. Finally, the project will also focus on the relationship of the villa to its surroundings in the territory of Tivoli.

Course Description: Students excavate and take part in related activities, from geophysical prospecting to architectural survey. They contribute to an onsite seminar designed to develop innovative solutions in addressing the historical and art historical issues raised by the villa. The program also plans to offer mini-courses on specialized topics, ranging from archaeological photography to the modern history of the villa as an exemplary case of the reception of classical antiquity. A database conceived jointly with the Archaeological Superintendency of Lazio and developed in collaboration with the Media Center for Art History will function both as the archive of the project and as a resource for scholars and students interested in the complex and fascinating history of the site. Among other things, it will host high-resolution images of the statues and other ornamental artifacts from the villa that are now scattered among museums and collections throughout the world, in order to virtually reassemble the original decoration of the complex.

Information about the 2020 season will be available soon. For more updates on the excavations at Hadrian's Villa, and to connect to the APAHA community, visit the program's Facebook page.

About APAHA
APAHA is an international short-term program of advanced education created under the joint aegis of Columbia’s Italian Academy for Advanced Studies in America and H2CU, the Honors Center for Italian Universities of the Sapienza University of Rome. Francesco de Angelis (Art History and Archaeology) and Marco Maiuro (History) are the Directors of the program.

The global class at Hadrian’s Villa is an expansion of APAHA’s earlier initiatives. Since 2011 APAHA has been conducting fieldwork at Villa San Marco at Stabiae, near Pompeii, where it has performed the first stratigraphic investigation of the pre-Imperial phases of the site, uncovering layers and materials that date back to the 6th century BCE. In the summer of 2013 Professors de Angelis and Maiuro led a research tour of imperially owned villas in Latium. The inclusion of the project at Hadrian’s villa will allow APAHA to significantly enhance the educational scope of the program and contribute to making Columbia one of the main centers for the study of ancient history and classical art and architecture in the United States.